In Life You Get What You Think You Deserve: The Importance of Expecting Big 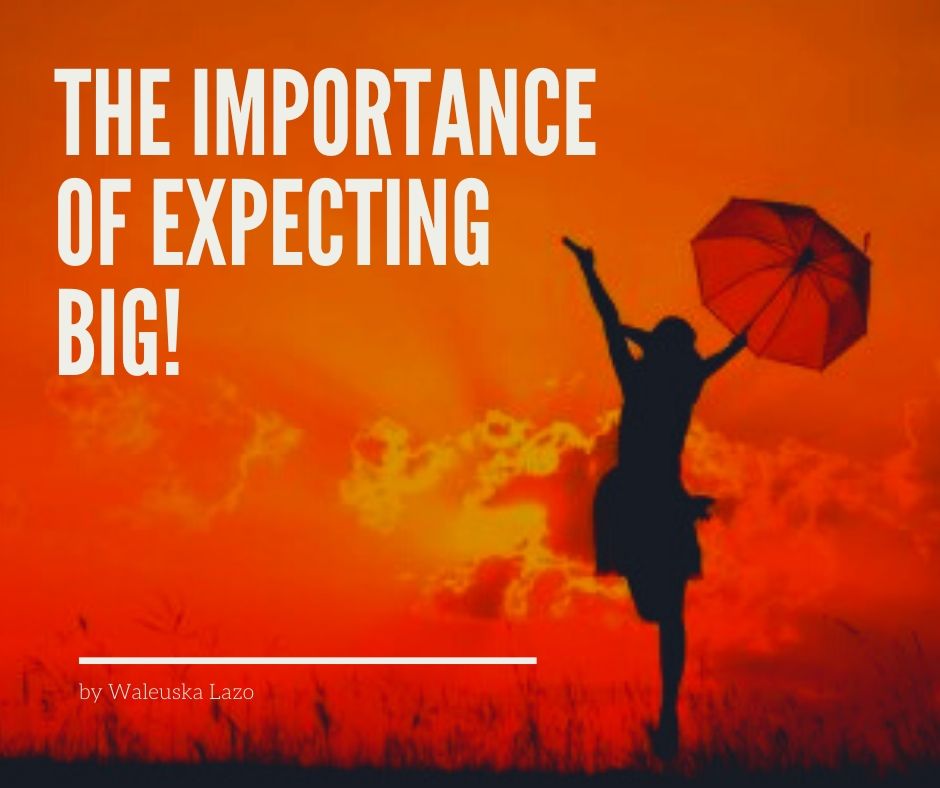 I heard the preacher, Joel Osteen say the other day that God meets us at the level of our expectations.

Yes, there is power in our expectations. When you expect the good, you find the good. When you walk around expecting the bad, that same is true.

There is a direct correlation between our expectations and the quality of life we have.

For example, there are people who are impeccably optimistic. It does not matter what adversity they face; they have the absolute conviction that they’ll come out on the other side. My grandmother, Rosita, was like that. In spite of becoming a widow at a young age, with five young kids and a mother to support on her own, she never panicked. She provided plenty for them. She raised all her children to become productive, professional members of society. When asked how she managed with no family members to help her financially, no social assistance, and at a time when women were not as equipped for the workforce as today, she would say, “I know my God will always provide.”

She never lost her faith. Some way, somehow, she had the unwavering expectation that her life and the life of her children were in higher hands. “The Lord is my shepherd, I shall want for nothing” was her mantra. She truly believed that her life was guided and protected, so she never feared failure. Being the entrepreneur that she was, she went on to create a few businesses and succeeded all on her own. According to her faith, so it was done unto her.

Like her, there are people who actively expect great things to happen to them. I believe that their expectation creates the amplitude of energy necessary to attract great things into their lives. We have all heard of people who have built amazing lives in spite of their substandard beginnings. People who created incredible wealth, lost it all and made it all over again such as Steve Jobs, Martha Stewart, W. Herbert Hunt, and Walt Disney to name a few.

What do these people have in common?

They were not driven by fear. Instead, they had an innate expectation that no matter what they faced, they believed they’d bounce back —and they did. Again, according to their expectations, so was done unto them.

Is there something real about that? Could it be that when we expect to be guided, provided and protected, we ignite the power of the Universe to do just that?

On the other hand, we have people who do the opposite. The Pessimistic ones who walk around consistently expecting things to go wrong. They are often unaware of how negative they are and don’t understand how their unconscious thinking keeps them stuck. Unable to fulfill their life’s calling because they are always expecting things to go badly for them; “It’s going to be a terrible winter. I will fail this class. Flu season is coming. With my luck, I will get sick. Traffic is going to be horrible today. Things are going so well for me right now I am afraid it won’t last. This is too good to be true. Nothing good lasts forever. That could never happen to me.”

Do any of these statements sound familiar to you?

Last but not least, there are the ones I call the Cautious ones who consciously go through life playing it safe. Cautious people work hard, they have expectations for themselves and goals to attain, but they never dare to dream too big. Cautious people stop themselves from expecting the big breaks, the abundance, the success — all due to their fear of being disappointed if things don’t happen.

But what if they did?

Cautious people are content with good enough. I will give you an example that happened recently that is close to my heart. My daughter, Victoria is an equestrian rider. She has been working hard for a long time to compete and qualify at a prestigious competition. Unbeknownst to Victoria, her horse didn’t adapt well in the busy environment at the show and suffered from high anxiety. He refused to do some of the jumps which caused Victoria to not place, except on one of the competitions. Victoria came in 1st and it was a beautiful moment for her. It was a crowning achievement at her young age to be 1st against the best riders in her division.

After the fact, I asked Victoria if she was disappointed about not placing in the other two rounds due to her horse’s anxiety. She responded that she was a bit sad, but that she was also ok with it because she had wanted to place in at least one of the rounds and she did. I curiously asked Victoria why she only wished to place in at least one and not in all?

Victoria said that since it was her first time doing this competition, at this level, knowing there would be many strong riders, she just did not know what to expect. “I was afraid of wishing and being disappointed after,” she responded. Clearly, for whatever reasons, subconsciously, Victoria did not believe herself to be good enough or worthy enough to place in all the rounds.

My contention to her was why limit yourself? Why not expect the best and know that you deserve to place in all of them because you are equally as good as or better than the other riders. I told her,“This isn’t about the other riders any way, but about yourself and your talent.” I reminded Victoria that she was born to be victorious in all she does from her heart —thus the name she bears!

Sometimes, our need for self-preservation against failure and disappointment robs us of our birthright to expect and have magnificent blessings. We are all guilty from time to time of falling into a few or all these categories of people. The important thing is to decide which way of thinking you will consciously choose to embrace from this point forward.

Our expectations set the limits for the life we have. When I was a little girl, my father sat me down and he explained to me that life plays no favorites. “It often give you what we ask of it,” he said. So I was taught at an early age to always expect big things for my life and so far, I’ve been blessed abundantly. Of course, it was not handed down to me, I had to work for what I have. But I truly believe that it was the expectation I had of succeeding that enabled me to often not see the obstacles in my path.

If we expect little from life, we get little. If you expect things to not get better, chances are they probably won’t. I know people who when they get sick they expect to be sick for days. They just have an innate belief that they cannot heal rapidly. Others believe that they are so healthy they hardly get sick.

Guess who is right?

The power of expectation is critical in your life, but so is your ability to believe you are worthy of the things you expect. If subconsciously you don’t believe you can have those things, it will negate all the expectations you have. It is a universal law that we don’t get what we want, but what we believe we are worthy of receiving.

I will close out with one last lesson from my canine, Coco who understands the concept of EXPECTANCY and WORTHINESS.

Coco, is our beautiful Shih Tzu, and due to her hair, she goes to the spa every Thursday morning to get cleaned up. Being the princess that she is, Coco is dropped off at the spa by car in the morning and is picked up in the afternoon also by car.

On a particular Thursday, Coco put on her leash ready to go to her appointment. Because I was out that morning, I had asked a friend to walk her to the spa. It so happens that I arrived at the same time that Coco was being walked out of the house.

As soon as Coco saw me in my car, she pulled back from my friend holding the leash and headed towards my car. My friend’s effort to pull Coco towards the street was not working. The more my friend pulled on Coco’s leash, the more conviction Coco had to pull the other way. It became a tug-of-war. Coco pulled with all her strength, looked at me, and with her understated elegance and confidence stopped in front of the back door waiting for it to open.

Coco’s expectation was to be driven and was not afraid to stand her ground. Coco knows every week she gets driven to the spa so why would this time be any different?

In Coco’s mind, she knew what she wanted, what she deserved and would not settle for anything other than what she has come to know as her God-given right to be driven.

Now why can’t we do the same with our life?

As funny as this may sound to you, it is a lesson. My younger daughter was in the back watching this, and we laughed to see how Coco just knew what to expect out of her life and did not give in to the constant pulling of the leash.

Shouldn’t we be more firm against our daily detours and challenges? Coco expected big, and did not get persuaded to change her belief. Why do we let things and circumstances divert us from our expectation to receive the great big things from life?

Ask yourself, are you being persuaded too quick to be pushed to walk where you would rather not? or are you tenacious to push back and hold your ground for the path you know is the one you deserve?

We often flip flop and don’t stand firm on our convictions. Life gives us exactly what we ask of it, no more no less. So how many of you are compromising your goals, values, and dreams changing directions due to the pulls you get from our leash called life?

Let’s learn from Coco. Don’t let the leash of your circumstances pull you away from expecting big. Just because your current condition and situation may tell you that you shouldn’t dream, that it could not happen for you, doesn’t mean that it is impossible. It may look impossible if you choose to stay bound by what your current condition dictates in this ordinary plane. But when you expect big and you stay in faith, you tap into the supernatural field of the Universe. Stay firm. Know what you expect from life and do not settle for second best.

To succeed at your dreams, your behaviour must match your expectations with the absolute faith, confidence and determination that knows no defeat.

Be relentless in your dreams. The Universe didn’t make you for mediocracy. You were not meant to settle for second best or for good enough. You are meant to have greatness, health, abundance and joy in your life.

Back to the story of Coco’s tug-of-war. Guess who won?

Yes, you guessed it right.

I ended up driving princess Coco to the Spa and all because this little one knew what she DESERVED!